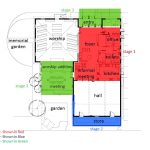 St.Mark’s was constructed in 1975 and has had no major upgrades.  The current construction is a staged project to improve the amenity of the building.
Stage 1 (commenced 8 October 2012) ‐ is the refurbishment of the kitchen / toilets and includes modifications to the office and meeting room space and redesign of the narthex / entrance to the church and hall complex. This work is confined to within the existing structure of the buildings.  This stage was completed and officially opened on Sunday 16 December 2012.
Stage 2 ‐ is the provision of storage space to the south of the existing hall. This work was completed in April 2015.
Stage 3 – is the extension of the worship space and provision of a new meeting room integrating into the new narthex space as developed in stage 1.